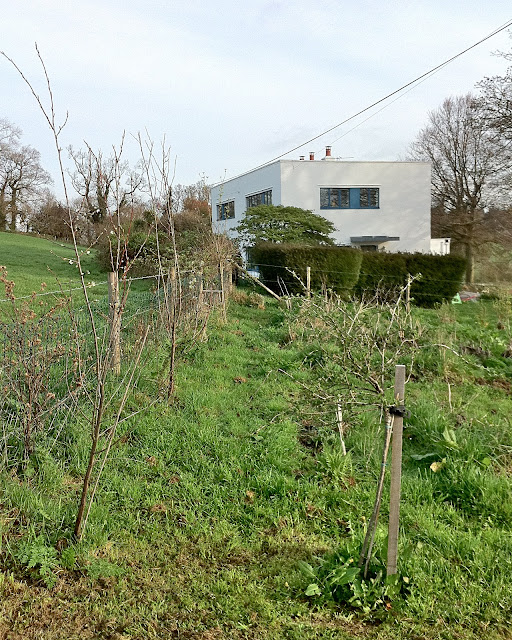 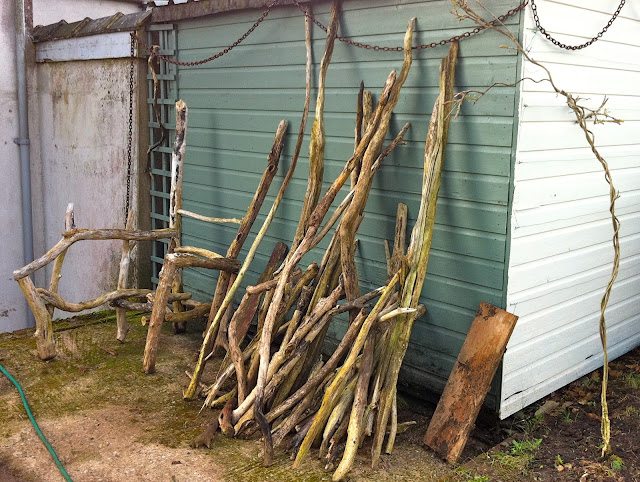 Driftwood and a half built chair sitting on an area that I know not what to do with. There are some good places for collecting driftwood along the River Dart and I always seem to manage to bring something back home after taking Bella for a swim. Sme will be used as supports for climbers etc. The Wisteria is adjusting to it's new home. I've painted the back of my neighbour's shed, which is on it's last legs and in fact, looking at this photo, I realize that I had better put a trellis up to support the Wisteria for when it does finally fall apart or is removed.

April 2011 - I'm making a series of short videos on my i-phone in an attempt to try to bring to life the process of the making of an English Cottage Garden. This is the first one made on Easter Sunday 2011. Not much to show yet in terms of the progress but it certainly shows from where I start!

I love the 'modern' Le Corbusier style of the houses that William Lescaze designed here at Dartington Hall in the early 1930's, including mine, which is built in the style of a traditional estate workers country cottage. This view shows my neighbours house plus the plot which will be my Kitchen Garden. I'm going to dispense with any idea of raised beds and develop a more traditional allotment style of gardening here, at least until I have the rampant perennial weeds under control. Some tap roots are over a foot long.This photo shows a wider view of the area to be worked on, including what I think may possibly be a young white Mulberry tree up which a Clematis Elizabeth, chosen for being named after my daughter, is attempting to ascend. Next to the Mulberry tree will be a small shed for the lawn mower etc which may resemble a faded beach hut, a newly planted young Cherry tree in the far right corner and a tall fence made of 8' tree stakes, with a wire netting base and then wires at intervals across the gaps and then a twisted old rope that was used to moor a boat on the river estuary looped across the top for the Zéphirine Drouhin roses to climb which will create beauty and fragrance, masses of food for the bees plus a delicate kind of privacy between us and our neighbours.
Yesterday when I was taking yet more rubbish down to the recycling centre I also found a narrow, rather long, wooden single bed, which I think may be good at the back of the studio in the sheltered garden to lie down on and listen to  the birds and relax or even sleep out  on the rare occasions that England's weather allows such luxuries.  Anyhow, a good scrub with disinfectant and some coats of off-white masonry paint will brighten it up until I decide what exactly to do with it or if I will paint it blue or not.
April 2011 - Finding enough large stones for edging the border has come to a temporary halt whilst I decide how to proceed with the path next to the fence.  Alex and Emmy made a really good job of clearing it but it is in shade until mid afternoon so after it's been paved I may make this the site for the woodshed.  It could be rather beautiful.  I will have to find a climber that enjoys some shade.  Perhaps a climbing hydrangea.  If only the fence wasn't there! 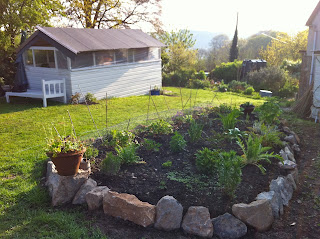 Last year I brought back a large old fern home in a large black bin liner and it has been sitting in the shade over winter.  I now have the perfect place for it where it is practically guaranteed to have 90% shade by the compost heap.  Actually it's not a compost heap, more of a heap but I'll make a proper one later on.  I need a turf ageing heap, a heap for leaf mould and then this heap where I leave everything until later.
I was born in the village of Grappenhall in Cheshire and remember Grappenhall lavender very well.  It grows to 5' so can be made into a hedge.  For me, as a very small child, I can recall a tall, fragrant forest of it towering over my head filled with the buzzing of bees.  I ordered these three pot online, only because I had not been able to find any locally but they had not been looked after at all well, were very pot bound and rotting from over watering.  I have now re-potted them and removed some of their roots and put them in a very sunny position in the hope that they will now thrive. Then I will propagate from them and in time there will be a hedge tall enough for my grandchildren to make similar memories.
I'll have to fence in the whole garden to hopefully stop the foxes and badgers coming in and taking the hens and stop the rabbits from helping themselves to everything else.  For now, I am slowly working my way around the kitchen garden. The soil is full of weeds, stones, old electric fence wire and metal poles as well as masses of deep pink synthetic carpet that has not rotted away that someone sometime decided to use as a weed suppressant.  It didn't work!

Perhaps there are people who may think that this is going to take ages but it is the only way as the soil here is particularly bad.  It doesn't take that long really and it is well worth it in the end.  I just sieve a couple of wheelbarrow loads every day in between other jobs and then mix it with compost and some horse manure and replace it in the border again.  And then I am going to train thorn-less blackberries and loganberries along the wire netting here and plant a cherry tree at the far end.
Four roses to train up the studio walls - Compassion and New Dawn at one end and Rambling Rector and Francis E Lester at the other and I am now anticipating how they will look when they have finally become established! 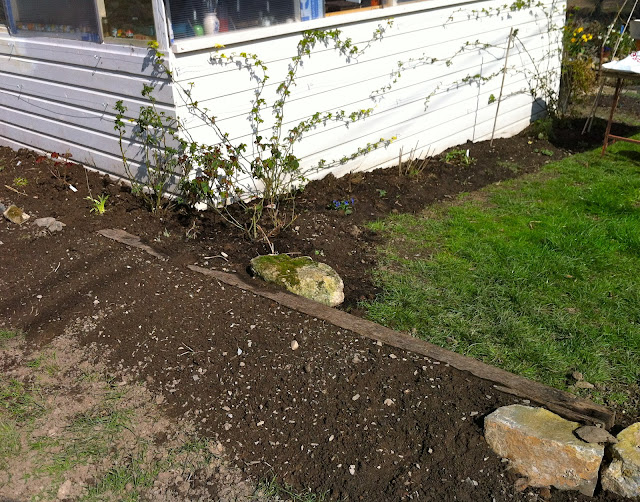 April 2011 - This is the second short video highlighting how the garden is developing this April. 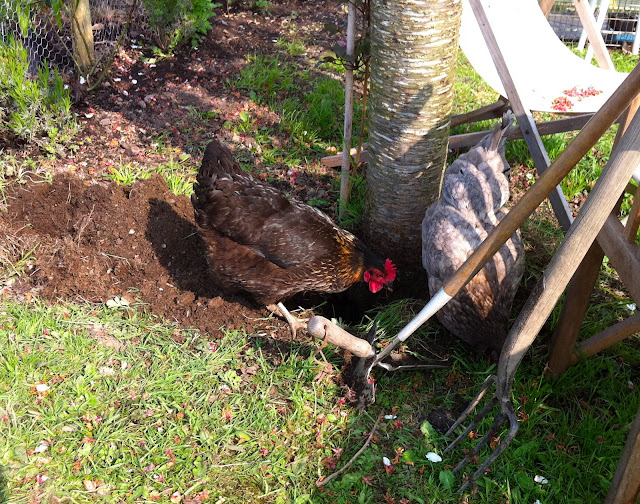 April 2011 - I've carefully excavated a deep hole between the roots of the flowering cherry tree and before I water it thoroughly and add horse manure and compost, Alex and Emmy appear from nowhere together with their sixth sense for an extra feast. 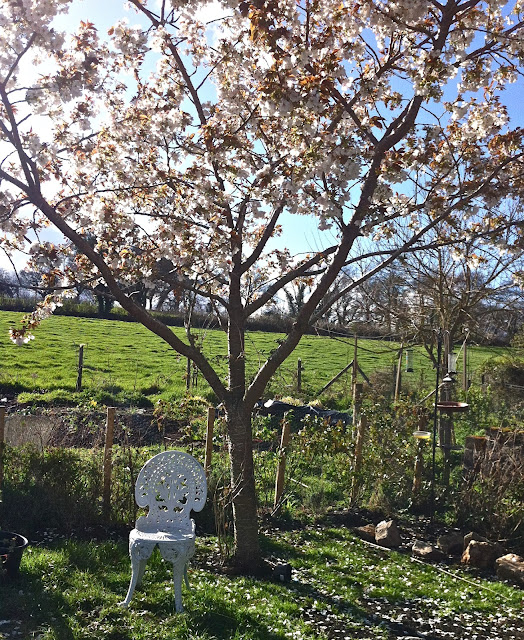 April 2012 - I've planted a Wisteria and a Clematis to grow up through the branches so that there will be flowers to look forward to after the Cherry blossoms have faded.

There are some good places for collecting driftwood along the River Dart and someone always manage to bring a few pieces home after taking Bella for a walk there.  These are waiting to be made into a garden throne and to be used as supports for plants.
The soil around the edge of the kitchen garden to be is full of perennial weeds, clay and stones.  All in all I think it's probably better to lift off the top sods and stack them and then dig in loam from last years stack.  Sieving the soil, removes any small pieces of couch grass, dandelion roots, dock, nettle and assorted bits of iron ware etc.  It's a slow job and I only have time to do about six feet of border a day, unfortunately.  Should have it done by the end of April!  Zéphirine Drouhin roses are to go along the fence at the back of the kitchen garden.  They'll provide beauty, fragrance and privacy plus help to keep the hens in and the fox out. They will also take an age to grow!
I had a rather large plastic pot which I planted up with lilies and daffodils and as I could not find anywhere to put it I decided to more or less bury it.  I think I will put it in a little deeper and then plant grass seed in between the stones.