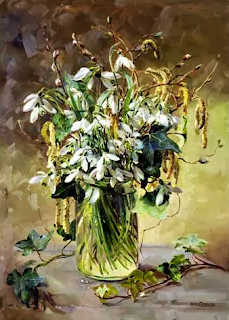 So - here we go 2021 - what do we call you? You're still the 20's - We had The Roaring Twenties 100 years ago but not many of us are exactly roaring, apart possibly Elon Musk as he heads off into space. 21 is one of those - just a little bit 'special' sounding numbers and anything related to it gets a sprinkling of hope from the start. We're talking of the great reset and goodness knows we need one but we're a divided world - polarised and arguing - a lot right now.

I have and am enjoying lockdown in its various tiers - it's as if the world has joined the artists, the philosophers, the contemplatives and the sages of old in living a life less travelled. So welcome and let's make the very best of it.

My world has changed for the better. The love of solitude has crept up on me determinedly and steadily. At first, quite a surprise as I'd always pictured myself living in a big happy family as a child - so where were all the others? They never materialised. But I did eventually find them - not the other children, rather the essence of mother nature - the world of nature - in the garden, when out exploring the countryside and in the infinite realms of the imagination. So for me, solitude became a place where one finds both magic and safety.

During lockdown, I've been able to make time for painting and am delighted to find that I have a bit of an obsession for flowers. Wildflowers, a little abstracted and layers and layers. I used to paint much more realistically but always with a touch of magic - a twist on reality. Going into winter I find I need to collect armfuls of dried wildflowers - dried by the wind and the rain and the change of the seasons - silhouetted against the sky and now against paper and canvas. Raw linen canvas and canvas coloured like faded frescos, intense and brilliant colours and deep mysterious colours from the world of the Renaissance. And layers on silver, bronze and gold, wisps of trailing white, smudges of pale turquoise. I paint in my head throughout the day just as I also develop and hear conversations between my characters in my stories in the early morning and the times of falling to sleep.

And then there is the business of business - my business and of earning my living. The dream I had years ago where a rather beautiful and somewhat elegant lady - yes 'lady' rather than 'woman' in this case for it seemed she had momentarily stepped forward from of the world of an intelligentsia of selected females to meet me. The feeling accompanying my dream was that I had always known of her and admired and respected her so I was delighted and surprised to see she was the person who was running or owned the art gallery I'd chosen to first show my portfolio of paintings to. She was rather like a historical figure from a time and place long ago. I have just realised that I have a woman who is of exactly her ilk in one of my stories called Zuleika - it translates into 'brilliant and fair' - she is, though eternally old now. But here I have to emphasise that I'm not using 'ilk' in a pejorative way but as an antonym. This became all the more profound when she suggested that I cut up my paintings and make jewellery from the fragments.

I was horror-struck - all the more as I respected her considered opinion above everyone else's. So you see I didn't expect her - what I felt, was a putdown. And yet in reality she'd thrown me a lifeline. I did as she suggested - after all, it was a sort of question - 'why don't you?' So - I did and it was another turning point. I see her rather as one of the three graces - Charis possibly as she is grace, kindness and life. It fits in my mind. Lockdown has been another turning point. The turn I'm in the process of making right now is the one we call Patreon. I've always taken to social media - it's ideal for someone of my temperament - I love to communicate and sometimes to meet people but need to be undisturbed in the main. This is so that my imagination is given room to reveal its gifts. Also, people have disturbed me a bit too much for my liking during my life. I was unprotected. I am wiser now. I don't hide away. I simply love contemplation and the joy that lives in solitude.

So - Patreon? Well, I've been thinking about it and now I'm researching just what I can do with it. I don't appeal to everyone - who does? But after so many years of being true to myself, I do know that I have a following of interesting and interested people who love what I make and some of the things that I say. So I have the required foundation on which to build a Patreon account - that is an established presence online.

I used to be an Art Teacher - not for very long it's true - I didn't take to the system or the curriculum or the general school culture. So I handed in my notice and went my own way - hitching through the South of France and Spain. The streets were sometimes paved with gold. Not always. And they need a little polishing right now. But I love teaching - sharing and making and know for sure that millions of us do too. I don't really look at other people's ways of doing, making or sharing so I suppose I risk seeming somewhat unusual. That's ok - I'll keep on following my own path.

The thing is I feel very safe, very confident and very enthusiastic about this next stage. I've been keeping up with social media since its arrival. I've always been able to see the point of it and its possibilities. A bit like the wheel and clean water on-tap. Or telephones or boats. Anyway - I'm trying to work out what certain phrases, jargons really mean and to see if I need them. I don't have people I personally know who are embarked on the same journey to ask for guidance and actually they would probably say as I will - you need to work it out for yourself. And we have forums - just like Ancient Rome. And I even have my own permanent pitch on our modern-day Agora - Totnes Market on Fridays and Saturdays where strangers and old friends meet and have the most interesting and spontaneous conversations. The wisdom of the market place is a reality.