In and Out of The Studio

I have an old wooden box

Of powdered metallic pigments in the studio - beautifully stored in delicate glass phials. They have diagonally cut cork stoppers that are covered when unopened with soft kid leather that is then secured with waxed linen twine and tied with a small very tight little knot. A work of art in themselves. 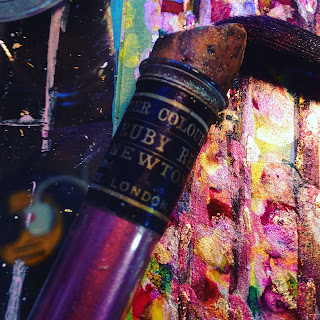 The majority of the colours are  in a range that is soft and subtle, reminiscent of the 1920's and 30's. Though some appear to be pale until opened as time and daylight have faded them against the walls of the glass phials. Only the tiniest amount is needed to make a dramatic impression and to add a further dimension - really quite magical. I layer them on with sign writer's gold size. It adds a certain lustre when juxtaposed against ink or gouache. The addition of resin later on brings an extraordinary dimension. My work is about many things - looking deeply and being aware of the fleeting moment are two of them.

These metallic pigments were always in the house when I was growing up though I was only allowed to look at them. I remember being most impressed by the delicate kid leather and how it was wrapped around the cork with the cord. We had hundreds of books and magazines of various kinds - National Geographic being one so

had read and knew about goats and leather and about cork trees and corks and it seemed such a wonderful and extraordinary endeavour to me that there were such people in the world who spent their time making them - bringing together all these things - kid leather, corks, delicate glass, twisted linen thread - school had taught me where that came from and how it was made when we learned about Ancient Egypt, and then the black and gold printed labels carefully glued on each one telling a different story - not to mention the alchemical contents - where were they all from? This may have led to my interest in finding out how things are produced and by whom and how these people lived. There you have the world in a nut shell. Who had conspired to bring them all together? But when I was very small, frankly all I wanted to do was to sprinkle the stuff on my hair. Thank goodness I was only allowed to look. I was quite literally 'away with the fairies' - probably as a result of all those beautifully illustrated fairy stories that where piled up in books around my bedroom.

The metallic powders were made by Winsor and Newton in the 1920's so now is a good time for them to see the light of day once more. The most beautiful things are often half hidden from view. Hidden treasures.

The one above is not one of mine though is probably my bench mark in terms of my ideal garden shed though. It is in France.
I have had quite a few studios - in the same way as I have had rather more homes than most people - on average.
I have tried different ways of working - space wise. In the home and away from it. Personally I like to leave the house (flat, caravan etc) and 'go to work'.
Only yesterday whilst I was working in my present studio - it's an old wooden summerhouse, surrounded by birdsong and views across the river - I realised that I have almost come full circle, well 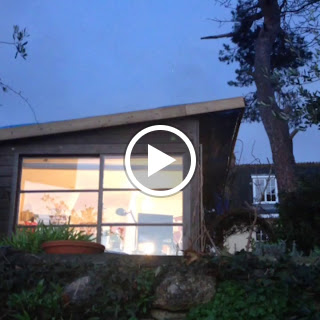 a small circle at least. Albeit, in terms of that feeling you get when in a small wooden shed - that fragile privacy, the closeness of nature and that smell - damp and musty in winter and burnt toasty in summer. Being able to hear the birds sing or the rain pelting on the roof, the wind rattling the window panes. I love it all. 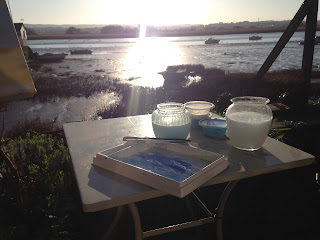 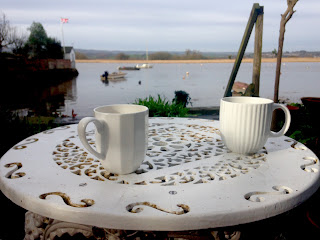 There is a place to paint outside when the weather is reasonably fine and a long seat to gather round with family for breakfast, lunch and supper, a perfect place for a catch up with friends and neighbours, even a little beach for stretching out and lounging in the sun - a little sun trap

and a spot for coffee first thing in the morning. I have no complaints. Though once again it is a temporary perch and as always I am making the best of it. So I am also imagining my next studio. Really the studio comes first, then the garden and then the house in my list of priorities. 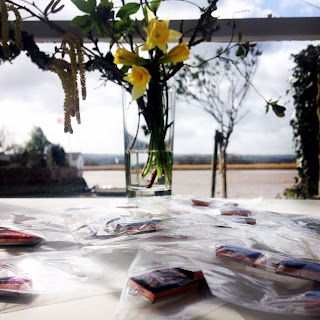 In the studio I can pretty much do all I need to do to create my papier-mâché jewellery. Apart from computer work and marketing as the internet is very iffy. Packing up orders could and often does happen in the kitchen too though our old cat Fizz can be a tad to inquisitive and friendly - he is very hairy. He's now 17 years old and set for 27 I think. When he finds his spot he will stay for days. 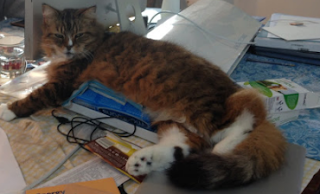 My first private space was the empty chicken house at the end of the garden when I was about nine years old. I had grown up with those hens, they all had names, though some were more memorable than others. Some had definite personalities whereas some not so much. There was 'Queeny' because she was the Queen, she was a Light Sussex - and a grown up in the world of hens. But she was also very adaptable and compliant and would happily allow me to dress her in my doll's clothes and strap her into the doll's pram and walk her up and down the road on which I lived. I didn't see the point of dolls. As all the hens - Oily, Beaky, Browny, Whitey etc gradually died of old age, they were buried underneath rose bushes. Then one day the need for my own 'house' began to grow inside me. I cleaned out the wooden chicken house, white washed the walls, I even pasted scraps of wall paper rather reminiscent of the stripy, flowery painting at the beginning of this post. There was even a window that I cleaned and made curtains for. I put down strips of carpet and made a bed from up turned boxes, brought in a small table and a chair and voila.

Jam jars filled with flowers from the garden mixed with wild flowers from walks to the woods. And books and paintings of course. The need to decorate. It was very cosy. I loved it and so did my friends. It was our den but in my head it was also my studio. I began my first 'blog' there in fact - A newspaper - hand written - we became reporters and would ask the neighbours for their news, then write it down and sell it back to them for a penny a paper. I had almost forgotten that episode. Hidden treasures.

Having a studio is essentially an attempt to create your own very personal and private space. In my mind I imagine that everyone should have one and that all living spaces ought to be able to provide that space for the people who live there. Utopia.
* I have think I have just heard my first Cuckoo - surely not - it is April and apparently they don't sing until May. Plus I live in the South West and Cuckoos tend to migrate North. Ah well, imagination is my second home. 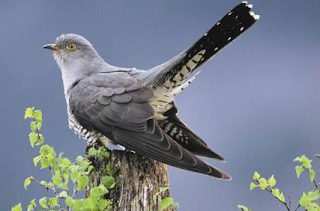 In the meantime as I like to choose - somewhat by necessity - to rent the places that I live in. Renting offers so much more scope for the imagination. I have lived in an assortment of places - very old, historically interesting places, a folly, fishermen's cottages, old farm houses, very modern flats, caravans, a hopper shed though only for a summer, a converted church, a couple of baroque villas and various houses and apartments. I always seem to get that feeling that change is on its way after three years. Suddenly I sense it, there is something in the air. I have it now. It is exciting. Change is exciting. Though not for everyone I know. Fizz our very superior cat is thankfully very adaptable.

So the studios have also changed. Often they have been where I have lived though sometimes cabin fever takes a hold and I long to 'go to work' to travel somewhere specific and be more conventional, though there will always be a spill over studio at home as well and then excuses are found and I stay at home. Though every April and towards the end of September I get that desire to take flight and head for - in my case - the South of France - hopefully I will make it tis year.

My present studio is one of the best and even more so as now the huge oak tree that hangs over from next door is filling up with birds singing all day long. In the evening the water birds call out across the river in the reed beds, plaintive, other worldly. So I am feeling very blessed.

At the opposite end of this studio spectrum is the one a few years ago in a weird industrial complex that had concrete block divisions that did not reach the ceiling and all the noises mingled above. I played French Impressionist piano music on my laptop in an attempt to bring balance against heavy metal. But eventually resorted to headphones.

When I took Bella (our family Black Labrador) out for her walks I would try to ignore the piles of rubbish and broken fences and imagine that I was walking in Capri along via Tragara. 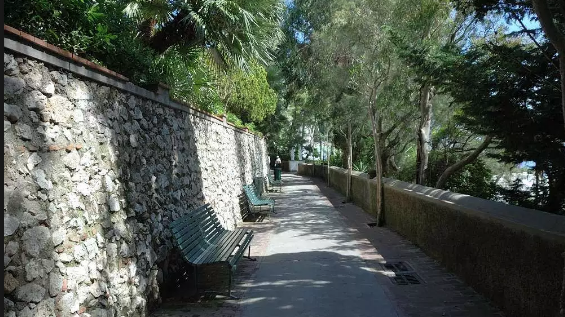 It worked perfectly though not a patch on the real thing. I have had a life long love affair with Capri and have yet to find my studio there. It will happen. 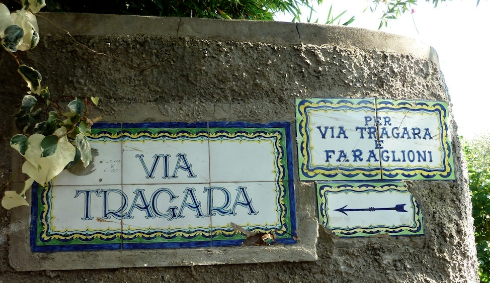 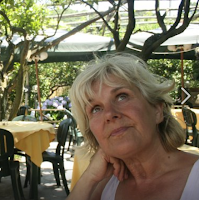