Tweet
In the studio most of the time. Sometimes delivering jewellery to nearby galleries - to have a chance to enjoy the changing weather, take photos, sketch out ideas for paintings and meet and catch up with gallery owners. Back home again and looking for and adding new galleries.

I'm a very early riser - always - since early childhood - I wake at 3am in winter - at 4am in the spring but that's only due to British Summer Time. Im perfectly happy with my Circadian Rhythm. During those early hours I can sense the peace and solitude of the night, walk out under the stars and the changing moon and feel part of the majesty of our little part of the universe and return home to the birds singing as they rise with the sun. But then I will make a cup of tea and return to the cosy haven of my bed where I can work on my laptop.

Fizz is usually curled up as close to me as possible wherever I happen to be - purring deeply and a bit too loudly. It's my time to be undisturbed and to concentrate on writing, social media and researching.

My current area of study is Line Vautrin ( my Pinterest board on her) - whose work I love, especially because I like to work in a similar area myself when I am not making my main range of jewellery. I like to experiment with what is to hand. Collecting thrown away fragments and natural forms, making moulds, casting resin, melting, burning and mixing stuff, mixing resin with other materials - currently Polyfilla Advanced.

This is Line Vautrine - gathered together for my own reference and shared here on my blog. Gathered from various sources. 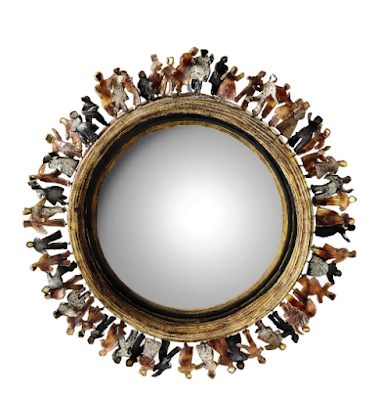 Atypical jewellery and object designer, Line Vautrin had a remarkable career even if the name remains little known to the general public. She began with the creation of costume jewellery.

She had a stand where she showed her creations in 1937 and opened a shop rue de Berry. She used a lot of materials - bronze, brass, terra-cotta, plastic. She develop a material that she called 'Talosel' - an acronym she derived from the French term for the material: aceTAte de celluLOSe ELaboré.

Talosel - available in different colours - when placed in the water gave random results, so the 'Pellimorphoses' range was born. 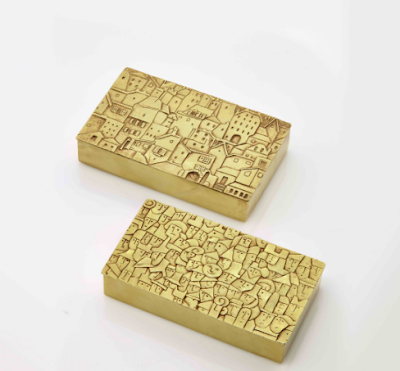 Word games, Rebus sign boxes - using gold plating and Talosel - and mirrors - with a particular iridescent technique of her particular universe.
Line Vautrin once had 50 people working in her studio, she also created an Art School to share her techniques.


Also one of my dreams - a place to experiment and to share ideas.

Talosel is a material invented around 1960 consisting of superimposed layers of resins worked with fire with inclusions of materials such as crystals.

A lot of Talosel jewellery appears to be made from melting and burning (pyrography) sheets of cellulose acetate, as well as melting cabochons and other inclusions into the plastic. Some examples from auctions are shown.

Made in France in the early 1950's this type of jewellery is hand made and unique - it is 'One of a Kind'.

Henry Perichon and Line Vautrin both experimented with with a new kind of resinous material called Cellulose Acetate, that she named 'Talosel' - (the acronym she derived from the French term for the material: aceTAte de celluLOSe ELaboré.) They worked with Talosel the way other worked with metal, melting it down and forming it into unusual shapes and ornaments, yielding a result that was strangely primitive, like medieval objects in a church treasury, and yet totally unique and unusual.

The jewellery range named 'Henry' was in this reverie of the time but drawing from other times. They were sold in the stores of couture and luxury boutiques, the stars of the time as Michèle Morgan or Claudette Colbert wore them. 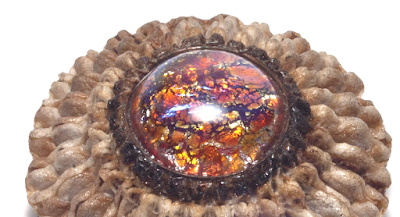 Today Henry is part of the creators of the great period of the fancy jewellery of luxury whose production is sought by collectors both in France and in Europe and the United States.

Talosel - was invented by the industries of Rhône-Poulenc at the beginning of the twentieth century - this plastic is the basis of Cellulose Acetate, harder and thicker that the Cellophane.

In his workshop 'Lyonnais' - Henri Périchon and Vautrin analysed the possibilities offered by this material - very similar to shell and associated to the technique of pyrography and created a new range of jewellery that was entirely artisanal. Shaped by hand, the mount was in basic Rhodoïd for this jewellery -  it was then crimped with metallic inclusions and rhinestones - originally, rhinestones were rock crystals gathered from the river Rhine, hence the name. The pieces of jewellery etc were made attractively unique by their specific stains.

Posted by Hilary Bravo at Monday, December 02, 2019 No comments: