Tweet
May 2012 - It is only the 2nd of May today. The weather has been pretty good so I have been working hard on the hen pen. I don't really have a choice. The hens have to have a safe place with room to scratch and roam before I can seed the new lawn and plant out the flowers etc that are taking over my studio. I need to get in there and paint. So - the hen pen and lawn. 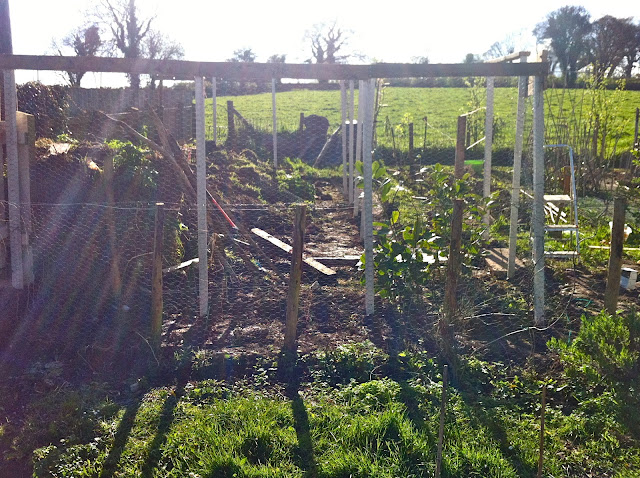 I often take photos at the end of the day to keep a track of what I've done but needless to say it's into the sun, hence the lovely shooting prisms! I have used the timber from an old gate that I was using to contain the potatoes to screw together the posts. It's my Heath Robinson way of keeping them straight whilst I put the wire netting up. The torrential rain has at least made the ground easier to dig. 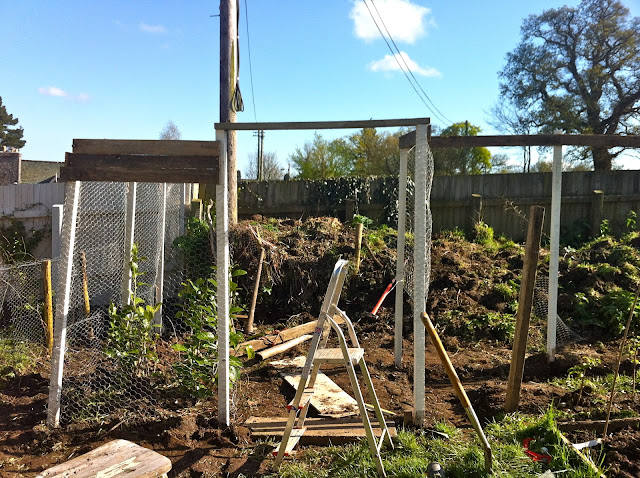 The beginnings of the entrance. I have a vague idea how to make a gate. I am digging out an area all along the edge so that I can bury the netting to deter the foxes. 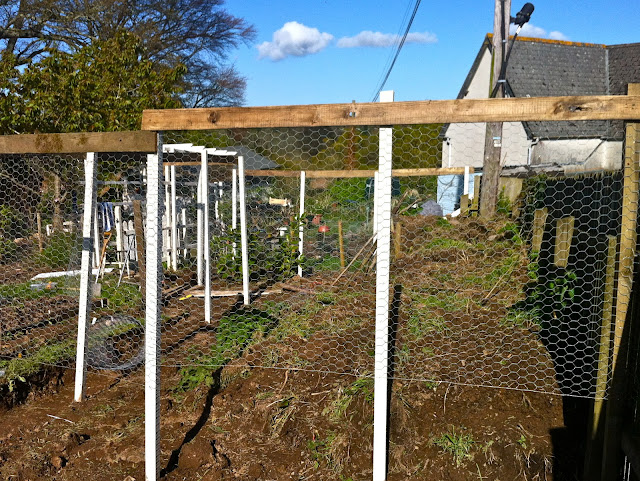 The hens will be able to scratch away here but as the soil pile is nearly at the top of the fence, they could easily hop over so I have a plan to prevent them. 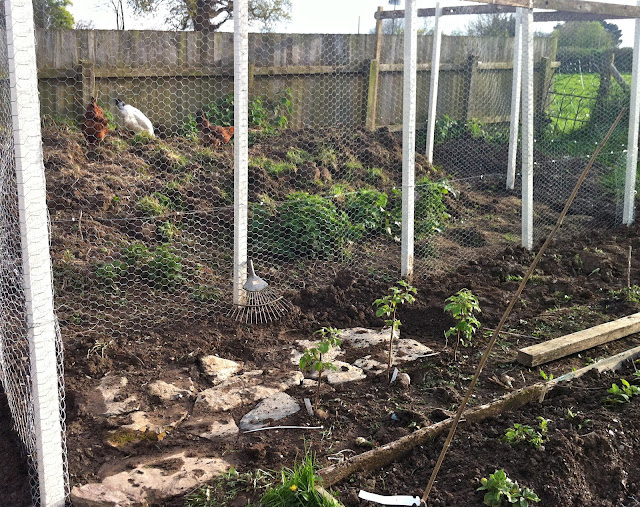 The stones that I have gathered together for the path to the studio are being used here now. Another change of plan. It seems far better to use them here and cover up the wire netting. I think that I will be able to grow beans and sweet peas up the wire with forget-me-nots along the bottom next to the path. Feeling quite pleased with myself today as I can actually see some progress, although pretty stiff and tired. Sailing tomorrow morning so an early night. My weekends are composed of Thursdays and Sundays. 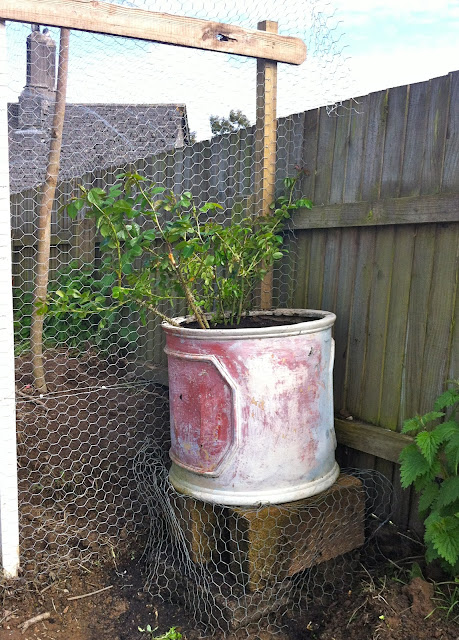 I have moved this container from the kitchen window, where it was just not working as there is so little sunshine to here at the end of the hen pen and planted a Kiftsgate rose! This is fox proof if he tries to jump in. It is totally lethal, well in time it will be. I shall train it along the top. I have yet to add an extra level as in the photo below. I could clip the chicken's wings but I can't bring myself to. I have also added another rose to train to the left. It is called Jolly Roger and looks like this - 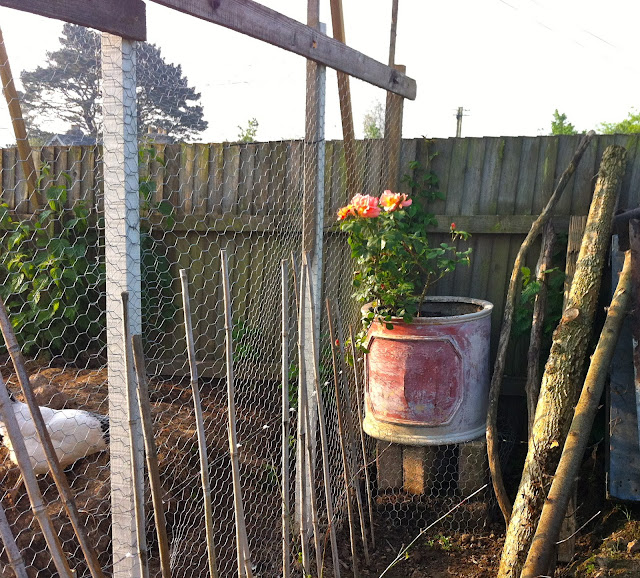 Thinking of planting artichokes along the wire netting as I have so many young plants. 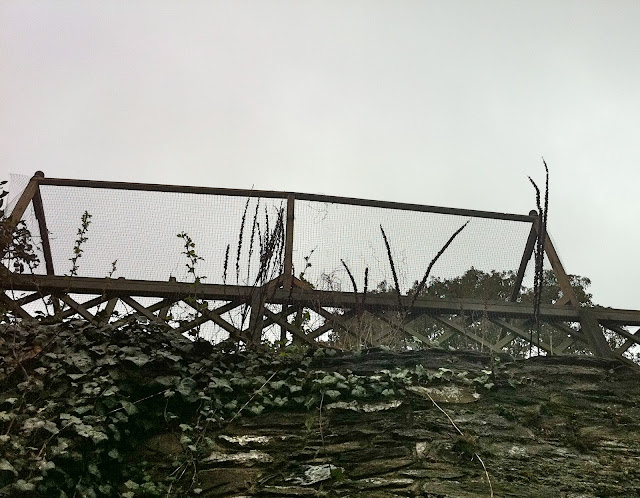 I took this photo a couple of years ago wandering through the narrow lanes of Kingswear on my way to Classics and just had a feeling that it would be a good idea. Well, the hens are escape artists. It's obvious really as all they have to do is hop over from compost heap to hen house and then it's one small step for chicken freedom. This idea will solve the problem. It will take ages for the roses to reach the netting so I am wondering if I could actually plant them in the top of the compost heap. Probably not but I need to dwell on contemplating a solution along similar lines. A raised bed of about 5' 6" in fact. It must have been done before... 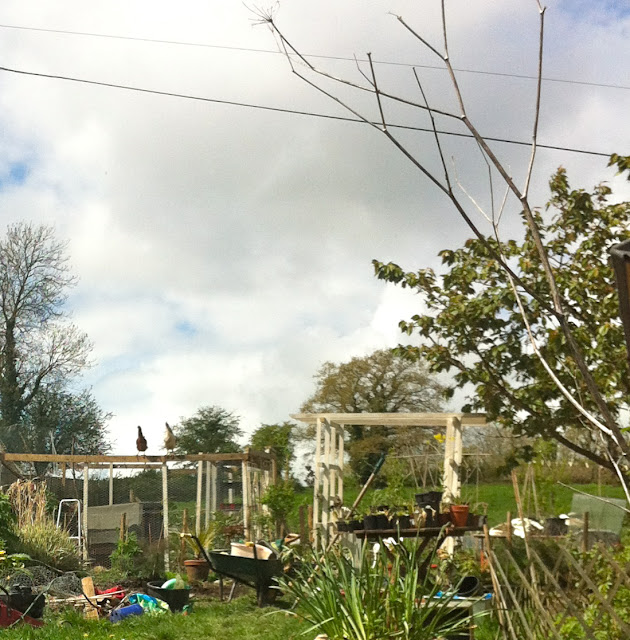 Ha ha - they will not be penned in. They will persist in launching themselves onto the top of the fence and leaping to freedom. 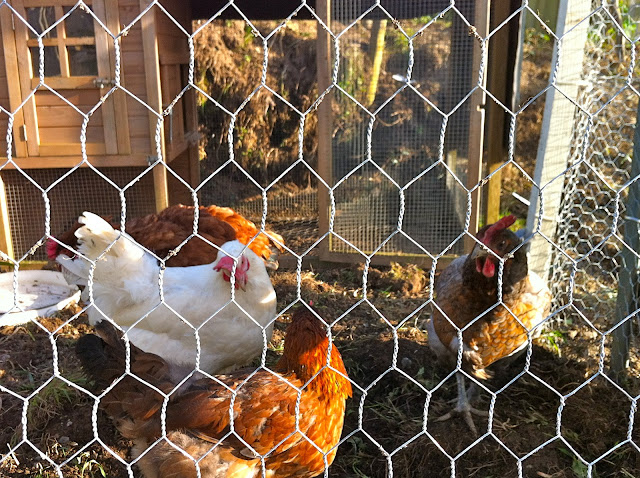 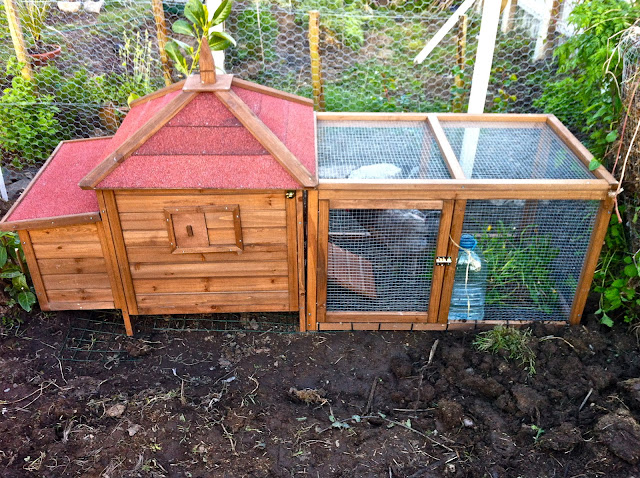 Emmy has her own quarters now within the hen pen. She was attacked by a dog a few weeks ago but has survived with lots os attention and constant care. Stitched back together and a course of pain killers and anti-biotics. This is the hen with only one eye. She was attacked by a hawk before she came to live with us. She is a survivor! 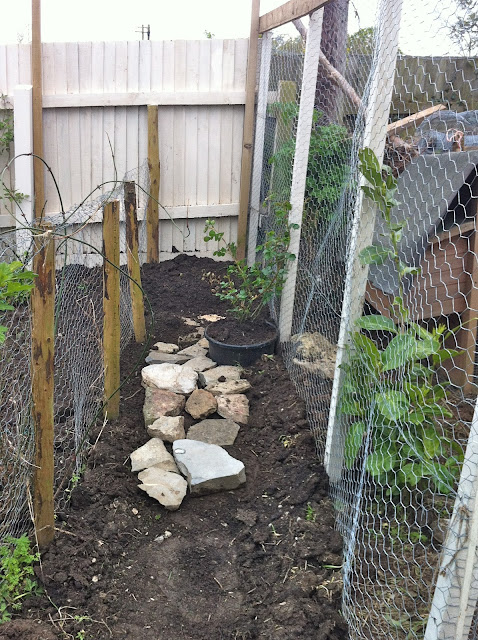 I have been trying to tidy up this side of the hen pen. Under neath the wire fence on the right are the foundations of a stone wall so nothing much can grow. I've added some soil on left and right and shall make a crazy paving path. I have put a beautiful red rose into the largest pot I could find and got it off to a good start with rotted horse muck and compost and bacteria. It will look really pretty later on in the year and better and better in the coming years. 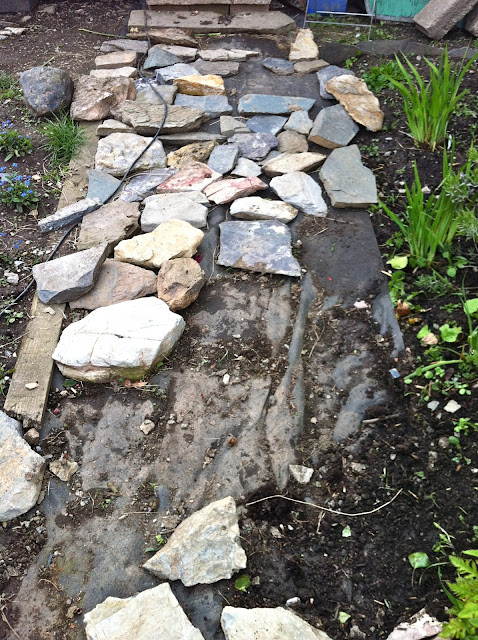 The path to the studio will have to be re-thought, now that I've pinched all the stones for the path round the hen pen. Gravel here perhaps. It will be a lot easier! 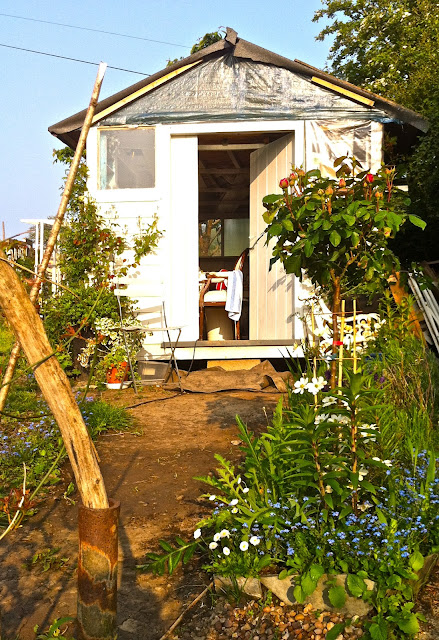 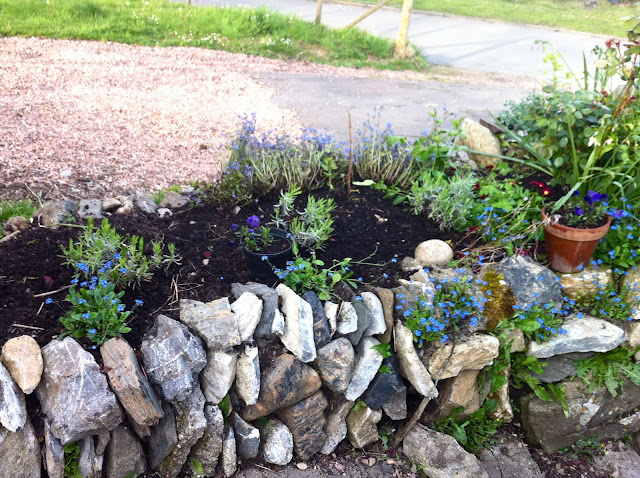 I've removed the tulips and rather gaudy daffodils to put somewhere else. The main reason is to let the lavender get some sunlight and stand a chance at growing. They can grow quite tall. 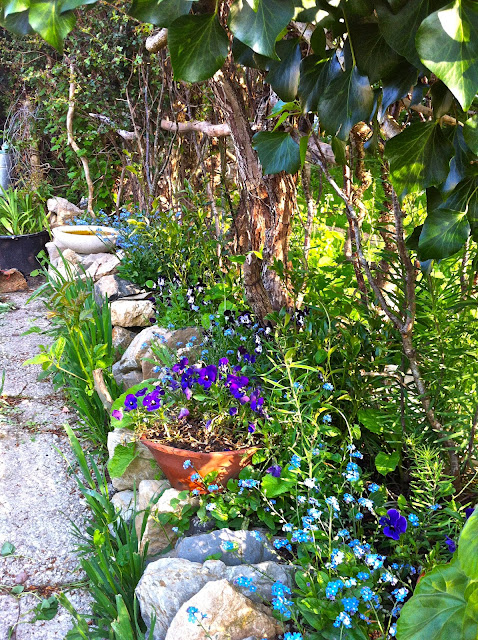 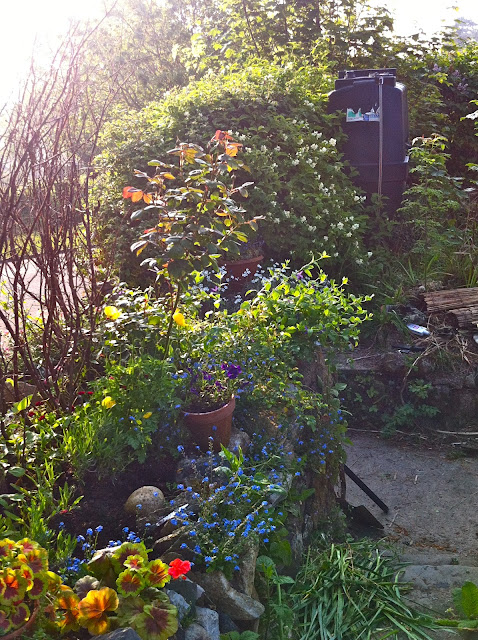 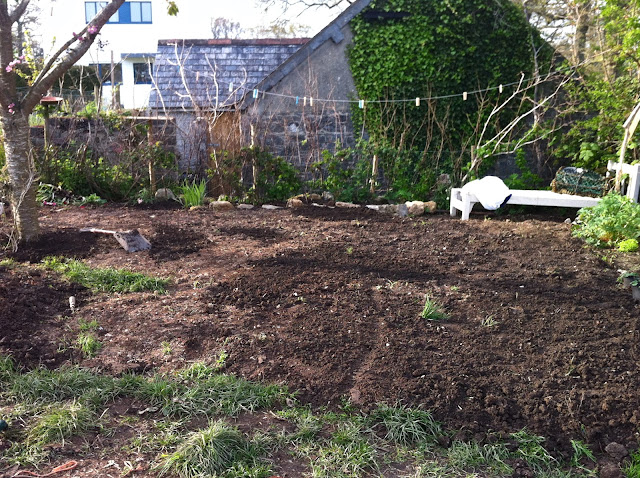 I have lost count of how many barrow loads of earth I have deposited her in order to adjust the height, fill in the dips and generally level this for the new lawn. Nearly there. 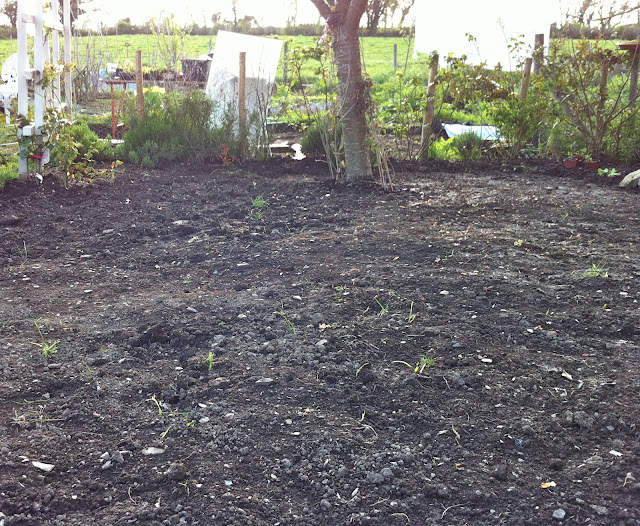 Well that's it really. I could go on and on but it is level enough and so I shall seed it now. I may put some more barrow loads of soil around the borders so that there will be a sense of enclosure when the flowers have a little extra height around the lawn later on in the summer. I have also put another Clematis at the base of the Cherry tree. A Montana. 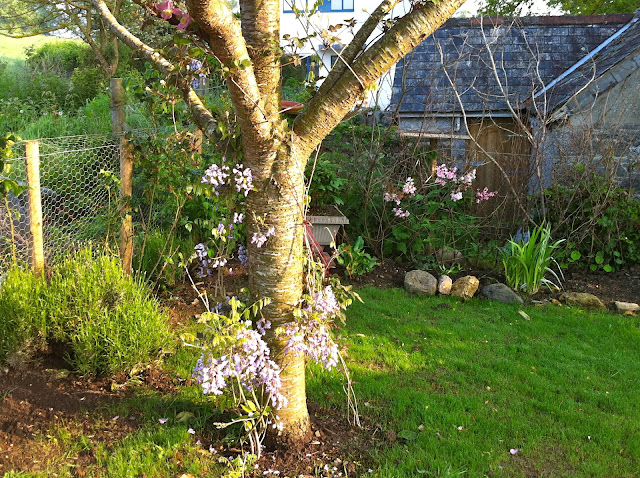 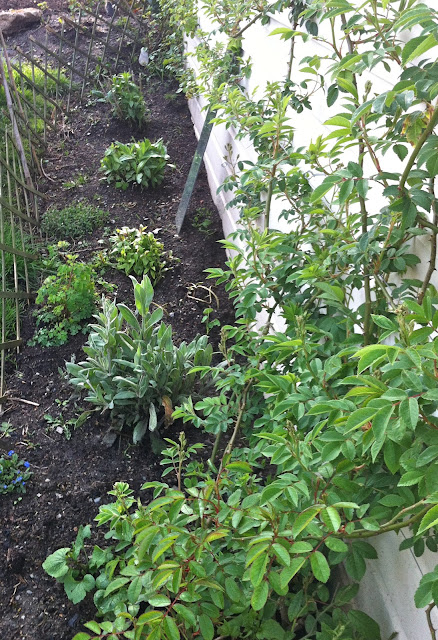 I have had to protect the plants along the shed from the ravages of my hens. I find stretchy trellising very versatile. Towards the end of May now and I have finally given in and clipped the hens wings! Peace now reigns and plants can grow. 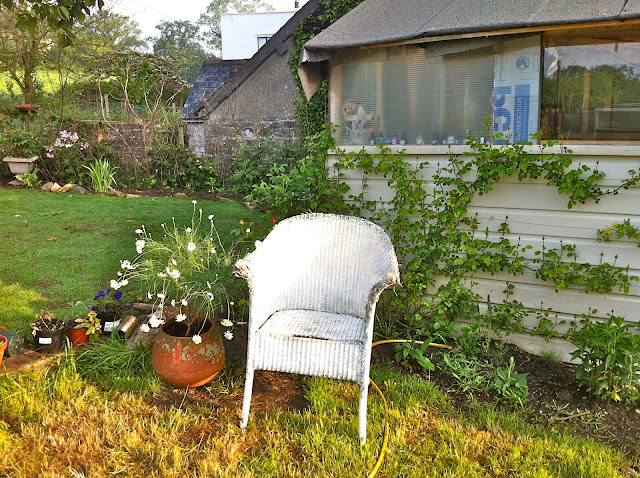 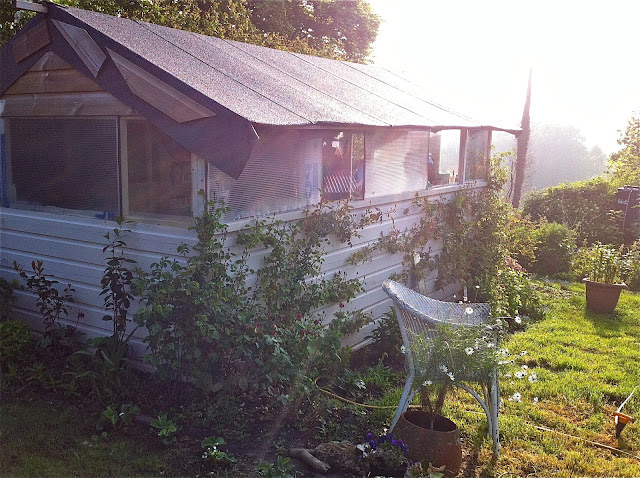 I now have the barge boards painted and ready to go up, at least at the front. Such a slow process. I have slowed down on the gardening front and been able to spent more time actually in the shed towards the end of this month as sometimes it is simply too hot to work in the garden.